What is an Infrared Radiation?

Infrared radiation (IR) is part of the electromagnetic spectrum with wavelengths that are longer than those of visible light. The wavelengths associated with IR ranges from 700 nm to 1 mm. IR can only be detected using special detectors that are sensitive to these wavelengths but can sometimes be felt by humans in the form of heat. Human body, which is warm, generates a very strong IR radiation in the range of 9400 nm.
IR is transparent (that is it will pass thru) some materials that are opaque to visible light and vice versa. Ex. IR will pass through polyethylene and with some attenuation thru germanium and silicon but will not pass through ordinary glass used in windows and some plastics unlike visible light.

What are Pyroelectric Sensors?

All objects above absolute zero emit heat energy in the form of IR radiation that is invisible to human eyes. Pyroelectricity is an ability of certain material to generate a temporary voltage when exposed to IR radiations. Sensors made with pyroelectric material are called IR detectors. These will be able to recognize the IR radiation and from this, a heat map of the IR source can be created. Having a filter on top of sensor that filters out all other IR radiation except in the range of 8-14 um (radiation typically emitted by humans peaking at 9.5um) are sensors that are tuned to detect human presence in a given area.

How does an Infrared motion detector work?

IR sensors have two sensing element (also available with four sensing elements) that are connected to the opposite inputs of a differential amplifier. The signals from these elements cancel out one another when the sensor coverage area is unoccupied. Hence, noise generators like vibration, temperature changes do not trigger a response from the sensor. When a warm body moves across the sensors horizontally plane (across the two elements), the signal generated by the two elements will differ in time, which is then amplified by the differential amplifier. When this signal reaches a predetermined threshold value then the occupancy sensor determines that the area is occupied and will respond by turning ON the loads like Lights, HVAC etc. 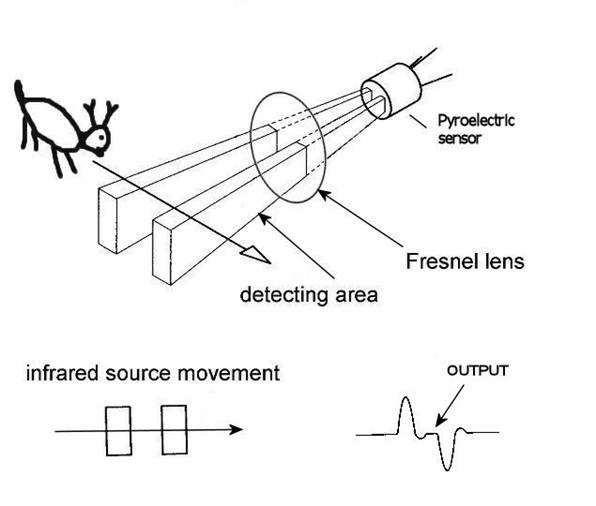 What is an occupancy sensor?

Occupancy or motion sensors are devices that turn lights or other loads ON or OFF in response to the presence (or absence) of people in a given area covered by the sensor (also called sensor coverage area). Some sensors will have additional sensors that can control lighting along with occupation and are called daylight + Occupancy sensors. The light control is based on two independent inputs from the sensor. Firstly, the sensor coverage area has to be occupied. Then depending on the amount of daylight available in their coverage area, the light outputs from the artificial lights are controlled to maintain a constant level of illumination in the area saving energy.

What are the benefits of an occupancy sensor?

The main benefit of occupancy sensor is savings in energy. Example the lights are only turned on in a given area when there are people occupying it and will be automatically turned off when the area is vacated. This makes the savings automatic instead of relying on humans to turn the power off when they leave. There are many varieties of these sensors available depending on where they are used. Literature indicates that the saving achieved by effectively using occupancy sensors can approach 75% but in a typical application, it is estimated to be around 40-50%. The ROI on these sensors can be as low as a year.
The chart below shows the possible percentage reduction in on-time for lights in a given area type.
Compiled by MyTech Corp. in a survey of large, corporate headquarters. Savings will vary depending on the area size, type of lighting, and occupancy pattern. Manufacturers claim that in some applications, savings can approach 75%. The CA Energy Commission estimates that typical savings range from 35-45%.

Where do you recommend that occupancy sensor be used?

Occupancy sensor should be used in areas that have an irregular usage pattern or areas like storage areas, bathrooms, conference rooms, private offices where people forget to turn off the light after they move out of those locations. They should also be used in hallways where the traffic is sparse during off hours, in the stairwells and other places that are visited by people unfamiliar with the area and would need lights to turn on automatically when they are present and turn off when they have moved on.
Occupancy with daylight controls should be used in areas where a significant amount of natural light can be expected during parts of the day. By dimming, the artificial lights in the presence of natural light will reduce energy consumption in large office areas as well as in private offices and conference rooms.

Places where these sensors should be installed are Private offices, Conference rooms, Restrooms, Garages, stairwells, Storage area, warehouses etc. The occupancy sensors with daylight control can also be efficiently used in large office spaces with many windows but these applications would require many sensors (occupancy, Daylight etc) work in tandem to efficiently control the lighting and heating in a given office space.

There are very few areas where these sensors would not be effective. Some examples are: outdoors where it is very cold or very warm, Indoors where the room temperatures is not controlled, Places with very high humidity and temperatures approaching human body temperatures.

What is the difference between an occupancy sensor and a vacancy sensor? 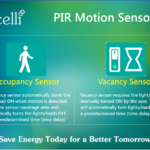 Occupancy sensors are used in areas where it is convenient to turn the lights automatically like Garages, basements, restrooms, conference rooms, Security applications, storage areas or areas frequented by people unfamiliar with the set up. By turning on the lights, automatically there is no need for a person to look for a switch in unfamiliar locations.
Vacancy sensors are ideal in high traffic areas such as hallways and areas where children and pets are present to avoid artificial triggering of lights by pets. The other places where they are better suited are private offices and in a residential set up in living and dining rooms.

How does and occupancy sensor work when sufficient natural light is available?

In these situations, you need to use an Occupancy sensor with daylight control. On this sensor there is an extra Lux control which can be set up to turn the lights on or off only when daylight falls below a certain level or rises above a certain level. These levels are controlled by the user and can be changed in the field.

It is possible (depending on the sensitivity setting on the sensor) that the movement of a pet or a small child within the coverage area of the occupancy sensor will trigger the lights to turn on. In such cases turning down the sensitivity, setting the occupancy sensor or masking the lens so it avoids detecting humans or pets below a particular height or using a vacancy sensor that is manually turned on is recommended. There are also sensors with special lenses called the pet immune lenses available for these applications.

What are the impacts of humidity or a nearby heat source or a fan?

If installed according to our recommendation there is no impact of the above on an occupancy sensor. However, in some instances if the sensor is placed too close to sources such as a heating or an AC vent or a fan directly blowing air against the sensor, the occupancy sensor may trigger the lights ON or prevent them from turning off. For optimal performance, we recommend installing sensors a reasonable distance away from any of the above mentioned or similar sources.

Can I control on how long the lights or loads are kept turned ON after the sensor coverage area is vacated?

Yes, our Sensors have a time delay option with 10 adjustable settings (varying from 15 sec to 30 minutes) using a potentiometer. If the delay is set using a remote control then you are restricted to 10 predetermined steps between 5 sec and 30 minutes. Once a setting is chosen, the lights or loads are automatically turned OFF after the selected interval of time has elapsed provided there has been no motion detected during that period signifying that the room is unoccupied.

What are major motions?

What are minor motions?

Minor motion is defined as movements of a person sitting at a desk reaching for the telephone, turning the page of a book, opening a file folder, picking up a cup of coffee etc.

What is the difference between occupancy, vacancy and threeway sensors?

Vacancy Sensor
These are semi-automatic sensors; the sensors require to be turned on manually by the occupant, will stay on as long as there are occupants in its field of view, and will automatically turn off the lights when the area is vacant.

ThreeWay Sensor
Three way sensors are a combination of occupancy and vacancy sensors. The loads can be turned ON either automatically by occupancy detection or manually by means of an external switch. Turning off is always automatic based on a user settable time delay.

For your convenience, our most common customer questions are answered right here.

Not finding what you want? Reach out directly through our Contact Us page.

Need Help? Chat with us
Start a Conversation
Hi! Click one of our member below to chat on Whatsapp
The team typically replies in a few minutes.
Kanak
Technical
Manohar
Technical - Marketing
Karthi
Technical